Part of Traditional Chinese Medicine, Chinese Reflexology is the ancient art of working pressure points on the feet, hands and ears that correspond to different parts of the body. Early evidence of Chinese Reflexology dates back to the 2nd century BC, when Dr Yu Fu treated patients without the usual herbs and acupuncture but concentrated solely on massage.

Chinese reflexology is believed to stimulate elimination, improve circulation and support the immune system. The Chinese believe it restores the body’s equilibrium of yin and yang, encourages healing and strengthens the body. It is a powerful treatment that is much more than just a foot massage!

Firmer pressure and sweeping movements are used on the reflex points on the feet in Chinese Reflexology. The feet are kept warm for improved circulation and patients may drink green tea throughout the session.

Whereas Western Reflexology is based on relaxation, its Chinese counterpart stimulates and energises the body so it is ideal for those needing a physical recharge or whose immune systems need a boost. 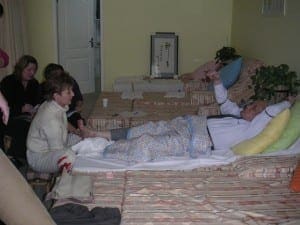 The Advertising Standards Authority (ASA) now prohibit the use of medical terminology on our websites. In addition, we cannot refer to clinical trial data unless they have been quoted in ‘old school’ medical journals. We cannot refer to abstracts (summary of clinical trails) either. More than 90% of reflexology clinical trails are undertaken in China, Japan and Taiwan where reflexology is part of every day life. These trials are statistically significant and amazing! Sadly, I am not allowed to mention them

I have a small mountain of anecdotal information from happy clients that have taken the time to write to me about their responses to reflexology. I am happy to share these with you but they cannot be listed here. Send me an email or pick up the phone and we can have an honest discussion whether reflexology may be for you

My general well being is definitely enhanced by regular reflexology with Rosanna. I leave treatments feeling a couple of inches higher and colds and other minor bugs go much more swiftly.” Hugh, CEO, London

“I have been a patient of Rosanna’s for about 15 years. After suffering from a number of health issues including stress I was introduced to Rosanna’s expertise in reflexology. She is a very special person doing a very special type of Chinese reflexology. Having sampled a number of reflexologists during my travels around the world, I can say without question that she is a true professional with a real knowledge of her discipline and has turned my health around.” Charles, property consultant, London

“I am frequently surprised at the results Rosanna’s reflexology treatments achieve with some of my patients. I have no idea how it works or how she does it, but the results are amazing. It is not such a great surprise; she is very well studied and experienced in her field. Her calm but vibrant energy is healing in itself.” Dr. Peter King-Lewis, GP, London

“I got diagnosed with (a medical condition)  just months after my 34th birthday and it hit me really hard. I was ‘out of action’ for over 6 weeks (not much fun when you are self-employed). The recovery was very slow, I felt I had no energy left and no medicine was able to help. My Mum suggested reflexology (she is Danish and reflexology is highly regarded by many health care professionals there, even funded up to 80% by the State if the patient if referred by his/her GP) and at that stage I was willing to try anything to feel better! When I walked out of  Rosanna’s treatment room after my first treatment, I could literally feel the ‘fog’ lift and my energy reserves starting to fill up again. And after just two more treatments I was skipping home from my treatments. My husband and friends were amazed at this quick turnaround and Rosanna is now my first port of call whenever I need an immune boost. The fact that she has a scientific background and training, as well as being a highly professional and intelligent woman made me trust her straight away and I do believe this also played a large role in my quick return to health. Thank you Rosanna for being so good at what you do!” Rikke Hansen, career consultant, London

“Rosanna helped me with improving the quality of my sleep which had deteriorated after having had my three children. She also gave my immune system a real boost, I am never ill any more – bugs affecting my children or husband just never seem to affect me any more which is great! Rosanna has a gentle approach to treating her patients and really is very knowledgeable in her field.” Delphine, London

“I started having reflexology after I was diagnosed with a minor low gut issue, initially just to help me relax as I hoped this might help the condition and I wanted to avoid taking steroids if at all possible (which was the only treatment my hospital consultant recommended). I’ve been one of Rosanna’s clients for many years now and have always been impressed by professionalism, caring and knowledgeable approach. Ever since starting reflexology, in combination with other life changes, my gut flare ups have been rare and never at the same level of intensity as in the first couple of years when the condition emerged. As yet, I still haven’t had to take steroids. The reflexology is incredibly relaxing and I count it as essential to, rather than a luxury, for my well being.” Jacqueline, London

“I was recommended to Rosanna by a friend. I had tried all sorts of alternative therapies, you name it – I tried it, but after a few treatments with Rosanna, I realised reflexology was the one for me. Not only did it relax me from what at the time was a very stressful work life, but it became my weekly sanctuary. My body was in a bad way when I started my treatment, with excessively high stress levels and hormonal imbalance, but we did see improvement over time, physically and mentally. Rosanna saw me through work highs and lows and then eventually through a healthy (and successful) pregnancy – I am sure she was the trigger for my labour! Not only do I believe in the health and emotional aspects of reflexology, I believe wholeheartedly in Rosanna, whose spirit, personality and experience is second to none. In fact, she is the only reflexologist I trust.” Ali, designer, now resident in Australia

“Reflexology plays a key role in my striving for a general state of good, positive wellbeing. Stress relief, management and working in collaboration with my physiotherapist and chiropractor in an effort to create stronger core stability, is a very rewarding outcome of my sessions with Rosanna. Her Chinese Reflexology technique provides a wonderful complement to a happy, healthy life!” Lesley, advertising consultant, London

“Following a car crash, I started having reflexology for my neck pain. I went weekly for four weeks and found reflexology eased the pain and discomfort. My physiotherapist commented that my injury was recovering very much faster than normal and she couldn’t understand why! I also found that winter depression that came on annually with the lack of sunlight was much, much less thanks to my regular reflexology sessions.” Rose, sportwear designer, now resident in Spain

“Rosanna’s treatments kept me calm, relaxed and feeling good throughout my pregnancy. I would also recommend treatments for relaxation and to treat symptoms of stress –  as is necessary after children, as before!” Henriette, new Mummy, London